A Pyrénées eating adventure at Le Brasero of Cauterets 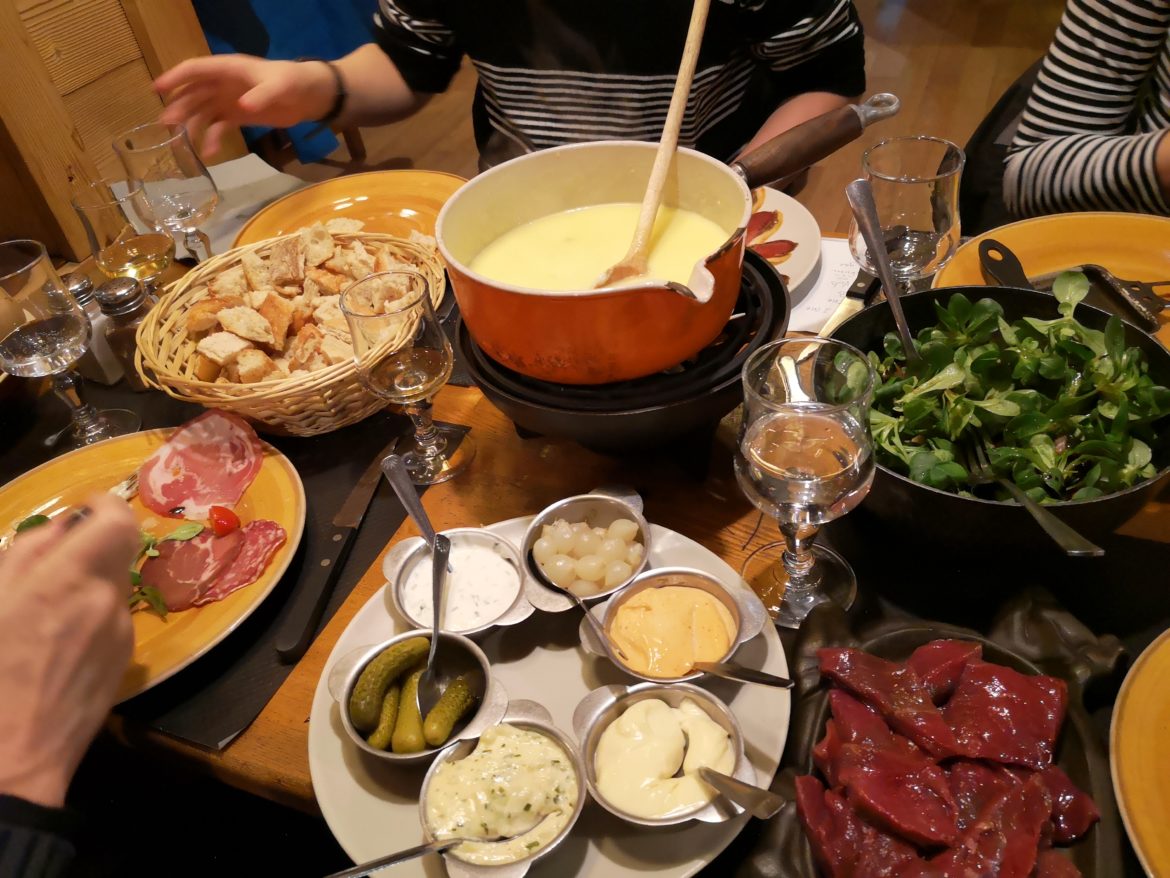 During our visit to Cauterets over vacances, the decision to eat dinner at Le Brasero offered a reminder of a how even such mundane outings can still be an adventure. Even after four years in France, we can open a menu and understand the words without knowing what they actually mean.

An onglet de bœuf? What is a “tab” of beef? (Answer: skirt steak). Google Images has often been our savior in such instances, helping us decode the culinary vocabularly, which essentially remains a third language to us. I’m not sure we could afford to eat out often enough to truly master that language, as tempting as it would be try.

But it doesn’t stop us from plunging ahead, and because our son had requested fondue at least one night during our vacation in the Pyrénées, we made a reservation at Le Brasero and braced ourself for the inevitable gaffes and embarassment.

The restuarant is located on the edge of the city center in a humble building that doesn’t really give you a hint of awaits inside. We had two pieces of good fortune. First, we made a reservation. The restaurant was packed on a Friday night, and we would watch as many sad-faced families were turned away at the door. The other was that we decided to eat at 7:45 p.m., which could be considered an ungodly early hour by French standards. But when we arrived, just about every seat was taken as it seems people come down from skiing and head to dinner.

Once inside, several things became apparent. A far more lively and unique experience was going to unfold than the exterior would suggest. Also, it is wam and smoky. Near the front entrance, a man toiled away at a chimney and the heat hits you as soon as you walk in the door. I’m not sure if there is a French equivalent, but for someone who grew up in the Mid-West, we would call it charmingly rustic.

To our initial disappointment, we were seated near the front door. In fact, this turned out be another lucky stroke as we found out later the interior could get even warmer (and our table would eventually get extremely warm). Our waiter was a cheerful fellow who handed us menus and left to figure out our order.

At first glance, this did not seem like it was going to be such a chore. Fondue? Sure, we know fondue. Raclette? We’ve had it plenty of times, and it’s one of our favorite, fun social eating experiences. There is typically a kind of oven or grill, and little scoops on which you put charcuterie or cheese to heat up and eat. So far, so good.

But then there was the category of “BraséRadés”. Which is…what exactly? Google wasn’t helpful, so we looked around, but the tables around us had only fondue pots. Hmmm. The waiter came back and asked if were ready to order. Um, not quite.

Without knowing exactly what I was getting into, I decided to just go for it and get the BraséRade de Bœuf. Ok, that’s one down. My wife and son had already decided to get fondue. But which one? Fondue Pyrénées with “frommage des Pyrénées”…which are what? Or, Fondue Savoyarde which has “trois frommages.” The waiter returned a second time and we asked him to explain the differences and ultimately the version Pyrénées (emmental, tomme, brebis) was selected. Our daughter decided to join in the fondue. So, we’re all set, yes?

The waiter returned for round three and took our order, and then began to shake his head, accompanied by the wagging finger of disapproval. He proceeded with a lengthy explanation of our mistaken assumptions. The fondue required even numbers of orders, either two people or four people. It wasn’t immediately obvious why this was an issue, as we had ordered odd-numbered fondues before. Was this a secret code all French learn growing up that fondue mandates it be served only to even-numbered parties? How did we miss this?

The waiter, fortunately patient and somewhat amused, sensed our puzzlement. So he explained that the issue was the apparatuses. If I ordered the BraséRade, that would involve one thing being placed on the table. And the fondue pot would be the second. These needed to be placed in between the people sharing them. But…the raclette and the BraséRade could be mixed and matched, because those would use the same cooking apparatus. Got it? Ordering was beginning to feel like we were in an Escape Room and we couldn’t quite put together all the clues to get out.

Okay. Back to the start. After careful intra-famillial negotiation, it was decided that son and mom would indeed get the fondue, I would get the BraséRade, and my daughter would get the raclette. Phew. The waiter noted all this upon his fourth visit, took the drink orders, and then scanned the table and then told us all to stand up. Given the combination of orders, we would all need to change seats. Mom and son needed to be seated across from each other to share the fondue, and father and daughter needed to be facing each other.

After some musical chairs, we settled back in. Within a few minutes, a team of waiters was bringing out food. Salad, bowl of frites, bread for the foundue. A wheel of mysterious sauces accompanied by explanations of their contents that were too fast to understand. Now some steamed potatoes. With each arrival, the waiter would have a contemplative look as the table filled up and he was trying to unlock a German World War II secret communiqué. Items would be carefully shifted around to optimize the use of the table’s limited space. There would be a satisfied look as the waiter reviewed the work, and then he would leave to fetch more.

By the time the fondue pot landed, the table seemed pretty full. Any more items might require someone to bend the laws of physics. Yet, there then came an astoundingly large plate of charcuterie and cheese for my daughter. Then a bowl of raw skirt steak for me.

And then, the grill for the BraséRade.

The grill was in fact a full on barbecue grill. What only then became clear was that the man toiling at the chimney was stoking charcoal, which was then placed in the grill which was then placed on out table. A cloud of thin smoke had gradually filled the entire restuarant as we sat there. Seated now across from a red-hot pot of charcoal, I placed the raw beef on top, and my daughter would slide her raclette tray underneath.

By this point, we were a bit dumbfounded. Surely this was enough food for about 10 people.

I felt the right side of my face beginning to cook slightly and leaned to my left as I ate. The cheese and meat on my daughter’s plate were melting fine all on their own without having to be placed in the grill’s underbelly.

Collecting our wits, we dug in. Everything was amazing. I’m no grillmaster, but the beef cooked perfectly on the grill. The fondue was sumptuous. And the raclette was immensely satisfying. Even if I was sweating out food as quickly as I ate it, the whole dynamic was too a entertaining and delicious to care.

Eventually, as the fondue was almost consumed, a waiter came to take the pot and return with a “surprise”, which we knew would be them mixing in an egg. But we acted delighted in any case when it came back, and made a half-hearted stab at eating a few last bites so as not to offend. We also feigned interest in getting dessert by reading the menu, but at that point there was simply no more will power or space to consume anything else.

Mercifully, the grill and the fondue pot were removed, and the temperature immediately returned to something a bit more habitable for humans. The waiter returned one last time with the bill, his good spirits never flagging, another bit of good luck for us. I’m sympathetic to the feeling that tourists can be frustrating idiots, needing everything that should be obvious to anyone with any bit of sense explained to them repeatedly.

And so even if we did manage to once again feel like tourists in the country we now call home, a waiter with a helpful disposition and the unexpected epicness of a meal makes all the occassional embarassments worth it.

Cauterets in the Pyrénées has France’s highest snowfall. What to know if you’re going.

On the Pont d’Espagne trail in the Pyrénées