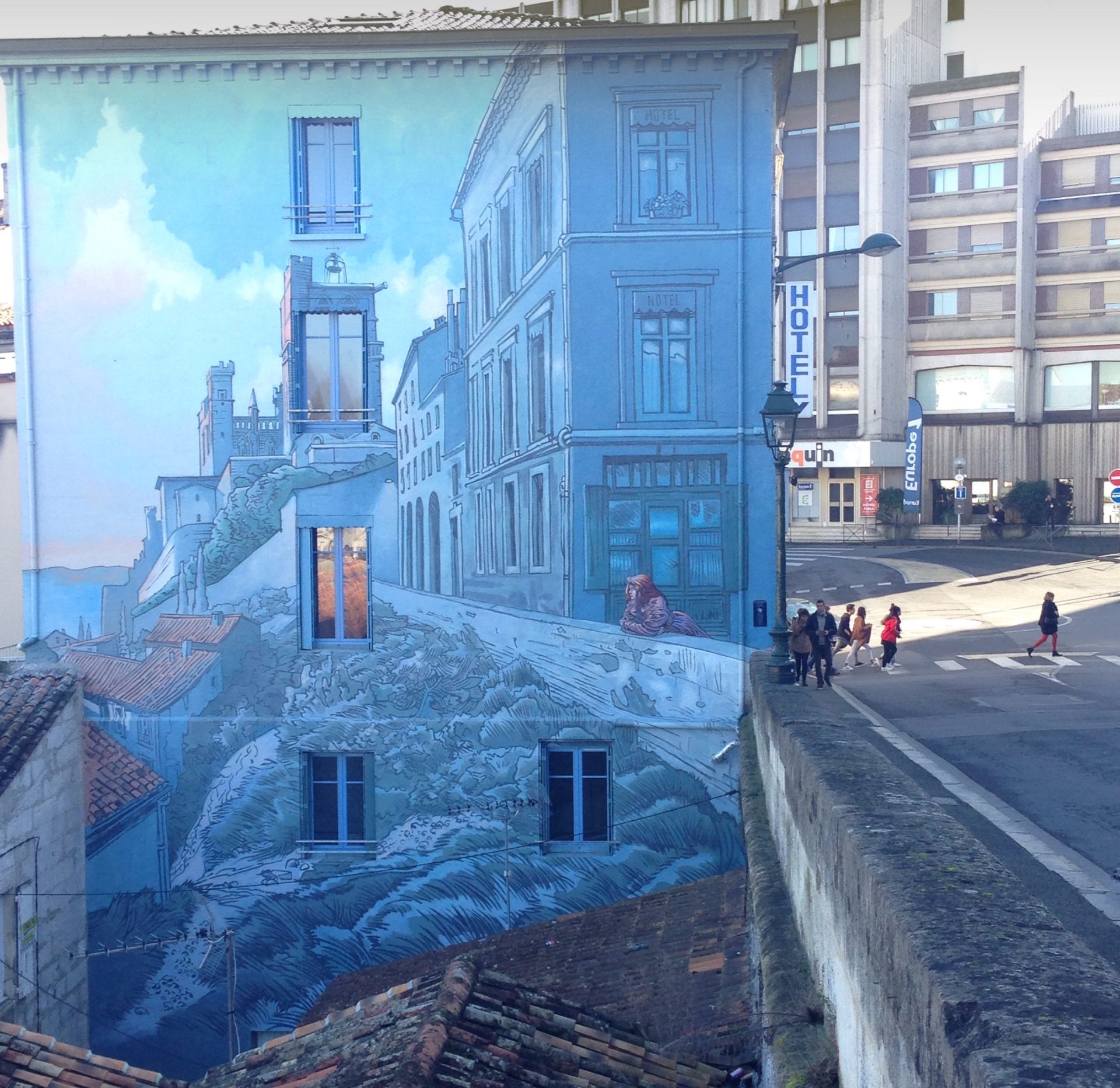 The rumors and buzz started swirling late last summer in the small French city of Angoulême: Director Wes Anderson would be filming a movie in this town starting in the fall. While there has never been official confirmation from city officials who are apparently swown to secrecy, the director of “The Grand Budapest Hotel” and “Fantastic Mr. Fox” has indeed invaded this town, located about one hour northeast of Bordeaux.

Angoulême may not be the first destination tourists think of when coming to France, but I visited several years ago and it’s easy to see how Anderson could have been seduced by its charm. Talk that the film would be a musical comedy turned out not to be true. “The French Dispatch” is set after WWII and has something to do with American journalists in France. The cast so far includes some new and some familiar Anderson faces: Bill Murray, Tilda Swinton, Benicio del Toro Timothée Chalame.Frances McDormand, Benicio del Toro, Jeffrey Wright,  Adrian Brody, and Léa Seydoux.

People started spotting Anderson back in September on the streets:

And while there is a typical amount of secrecy around the project (his reps told me he wasn’t doing any interviews), Anderson and Tilda Swinton appeared at the city’s Christmas tree lighting ceremony:

Meanwhile, his team is transforming some store fronts and various neighborhoods for the film:

Residents were particularly surprised to wake up one morning to discover man-made snow covering some streets:

One local group is taking advantage of the moment to hold a conferece on January 18 dedicated to Anderson’s most recent film, “Isle of Lost Dogs.” The evening’s speakers will include the film’s producer Jeremy Dawson and two of the animators who worked on it. And I suppose everyone involved is secretly hoping that Anderson will pop in.

“The city of the image”

While it’s unclear what led Anderson to choose Angoulême, it may not be as random as it seems at first glance. France has a wealth of adorable villages and small cities, but Angoulême also happens to be the country’s comic book capital. And Angoulême, which bills itself as the “city of the image,” has used that historic strength to turn itself into a major hub of digital arts, from video games to animation to motion capture.

The city is perhaps best known as the host of one the world’s largest comic book festivals, Le festival de la BD d’Angouleme. In France, comic books are called “bandes dessinées” or BD. And they’re taken quite seriously as an art form. It was the BD Festival that brought me to the city in January 2016, along with an estimated 200,000 other attendees.

While there, I had a chance to experience parts of this broader digital arts hub, which was quite remarkable for a town with about 42,000 residents. The first time I had any hint about this prowess was just a couple of months earlier, while researching a story for the Los Angeles Times about a new animated Peanuts series that had been created for France 3 TV. While the studio making the series, Normaal, was officially based in Paris, its main studio was actually in Angoulême. And it turned out they were far from alone.

The industry is grouped together by an association called the “Pole Image Magelis.” Its members include the city’s 12 schools that teach some facet of digital arts, from post high school to PhD. Yes, in Angoulême, you can get a PhD in “comic arts.” Overall, the city counts about 150 industry-related companies, including animation studios such as Blue Spirit, video game makers BiP Media and Bulwark Studios, and film studio Transpa Studios.

I toured SolidAnim, which does motion capture, digital effects, and virtual reality. One executive mentioned that Angoulême’s breadth of talent in terms of programmers, artists and storytellers made it hard to beat as a center of animation.

The crown jewel of this animated culture and industry in Angoulême is La cité internationale de la BD. This is a kind of BD cultural campus located to the north side of hilltop city center. Descending some winding stairs brings you to one of the entry points, a building that is home to the campus library and adminisrative offices named Vaisseau Moebius after Franco-Belgian comic book author Jean Giraud who wrote under that name.

From there, you can walk across a footbridge over the Charente River to the other part of the campus, including the Le musée de la bande dessinée. You could try to drag you kids to a lot of European museums against their will, or you could take them here and be a hero.

If you’re still hungry for imagery and comic art, you can then do a walking tour of at least 26 murals designed by many famous comic artists and scattered around the city. Such as the one at the top of this story, “La Fille des Remparts,” by Max Cabanes. You can get a full walking guide here.

Of course, even if you aren’t totally obsessed with animation and all things digital, the city center does make for an alluring stop with its own merits.

About the only thing that I didn’t get to experience was much of the local cuisine. Mostly because we were easting food at the festival or attending strange parties. Still, those offered some memorable moments, like a dance party in some hidden house in the middle of the city.

The next edition of the BD Festival starts January 24. I can’t attend this year, unfortunately. But I’m definitely eager to get back to Angoulême again.

The first images and trailer for the film have been released. Check them out below:

A warm winter escape to the Pyrénées

Halle de La Machine gets off to a roaring start

Here Are The Rules For Visiting The Louvre...

How to spend 48 hours in Lyon, France

9 igloos in France for spending a cozy...

Postcards from Honfleur: The old port town is...

Postcards from Lille: The perfect daytrip to northeast...

Saint-Eustache cathedral is a ‘Gothic skeleton dressed in...