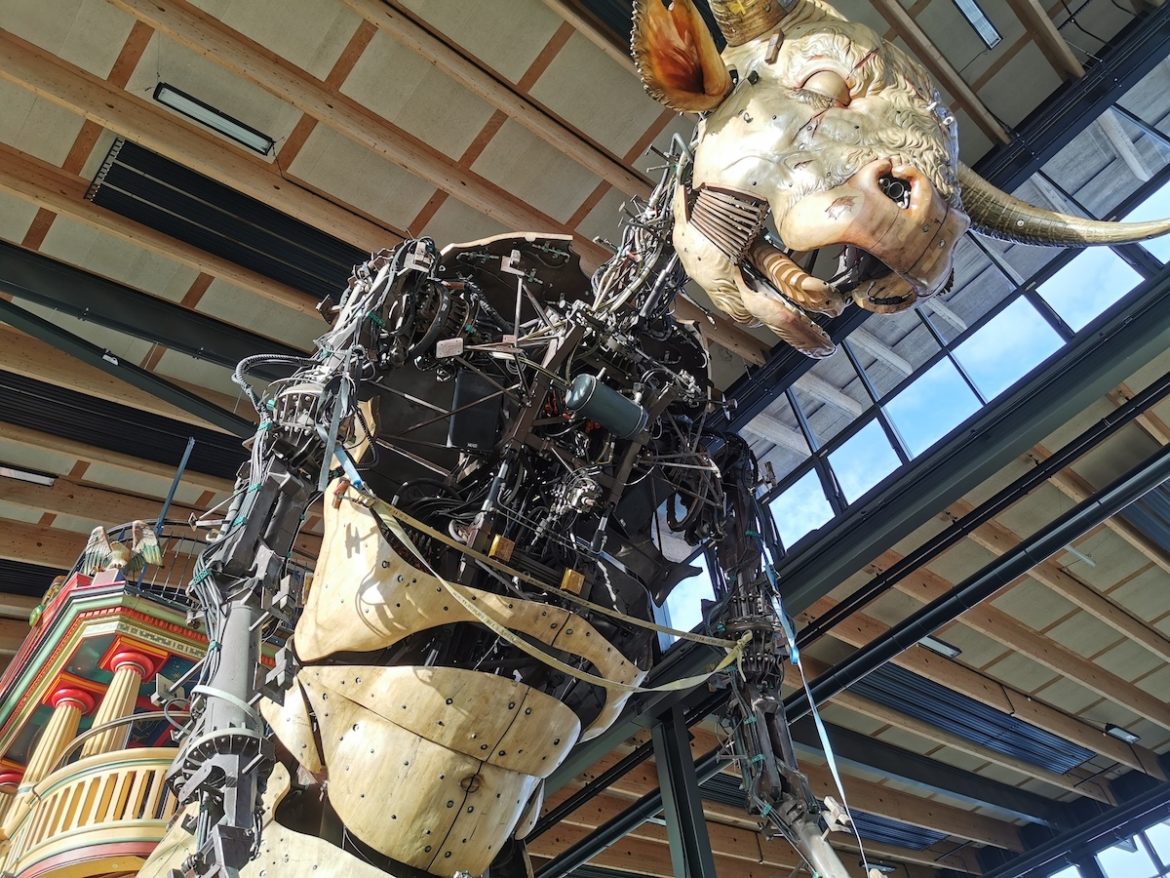 La Halle de la Machine closed in January for its annual pause to make repairs on its celebrated giant mechanical menagerie and to prepare for the year ahead. On a recent visit, I got to glimpse the work that goes on behind the scenes.

The focus of much of the work was the Minotaur, which made its debut in 2018 during a 4-day street opera in Toulouse. The Minotaur, made of wood and metal and weighing 46 tons, runs on a complex hydraulic system and is operated by more than a dozen people.

A short time after that, La Machine, the robotics and design group co-founded by François Delaroziere, had the grand opening of its new workshop in Toulouse. This compliments its design and construction studio in Nante, where it operates Les Machines d’Île.

La Halle has quickly become one of Toulouse’s signature tourist stops. During its first full year in operation, it attracted more than 300,000 visitors. Visitors can ride the Minotaur, which has so far made 1,570 trips up and down the long path outside the workshop carrying 67,500 people. But such work takes a toll, and so the company spends a month giving the Minotaur some much-needed maintenance.

Or, as workers here playfully like to refer to it, January is when the Minotaur takes its “cure” for an annual checkup from its medical team. These include the “veterinarians” who treat its joints for signs of “rhumatism”; a team of “dermatologists” for its skin who give the beast a deep cleaning designed to remove the effects of pollution; and finally a “neurologist” and “cardiologist” to ensure its mechanical elements are functioning correctly.

That work is now complete, the Minotaur rebuilt, and La Halle re-opens for its next season on Feb. 8. Part of the early highlights will be the next round of its fantastic Le Dîner des Petites Mécaniques from February 13 to 16.

These dinners use a variety of machines developed by the company to deliver the food and drinks in a festive atmosphere that includes acrobots, and orchestra, and food prepared by one of the city’s most renowned chefs, Simon Carlier.

To celebrate its first year, La Halle organized its latest carnival back in October. We spent an afternoon there, mesmerized as always by the creations. These included a piano connected to a series of liquor bottles that dispense various alcohols when you play to create a cocktail

And then there was the Ferris Wheel made of, ahem, toilets.

But as always, the giant spider and Minotaur remained the stars. It was easy to see why La Halle and its animals have quickly become among Toulouse’s most important ambassadors.

Ascou is a small Pyrénées station for great skiing without crowds

How to spend 48 hours in Lyon, France

Postcards from Joan of Arc’s Orléans

How to spend 36 hours in Toulouse

The Garonne and Ariège rivers by bike