Producing a lavish musical like “Bernadette de Lourdes” would represent a massive risk no matter where it was being staged. It’s far from a sure thing that audiences would embrace a religious-themed story packed with power ballads and rousing songs about a 19th-century teenage saint who claimed to see visions of Jesus’ mother.

But “Bernadette” faces other considerable hurdles. It’s a French musical premiering in a country that has never really shown much enthusiasm for the art form. (Don’t even get the French started on “Les Miserables.”). And it is being performed in Lourdes, the southwestern city that Bernadette made famous but which sits far from the nation’s cultural ground zero of Paris.

Nobody understands these obstacles better than producer Roberto Ciurleo, who has spent 9 years realizing his vision for this show. Given his track record of producing two previous French musical theater hits, there may be no one better prepared to overcome the long odds the show is facing. He’s convinced that “Bernadette” has the potential to resonate far beyond the religious pilgrims that are Lourdes’ primary source of tourism.

“It’s incredible, this story,” he said. “From the beginning, we really wanted to write a story that was like a classic of London’s West End or Broadway.” On a mid-June afternoon just two weeks before opening night, the cast of the Bernadette musical were doing run-throughs of the show in full costume for the first time. Behind them, an elaborate series of sliding panels moved to evolve the setting from the town, to Bernadette’s home, and then an elaborate reproduction of the grotto made from a complex digital scan of the real one where she reported seeing apparitions of Jesus’ mother in 1858.

The star of the show, 17-year-old Eyma, was already a rising star in France thanks to an appearance on a kids’ edition of the TV show “The Voice.” In full Bernadette character, she croons the show’s signature song and first single, “Why me?”

As the show unfolds, her mother insists she stop talking about the visions, her father worries about the poverty they face and their precarious standing,  legal officials conduct a harsh inquisition and threaten her family with prison, and doctors consider institutionalizing her.

Then in the face of her determination, one by one, each considers their own beliefs, the meaning of faith, before finally declaring they believe her.

I had been invited to attend the rehearsal as part of a story I was writing for the Los Angeles Times about the challenges facing Lourdes’ tourism industry.  Between 2009 and 2017, the number of hotel stays in Lourdes dropped by more than one-third, driven by the financial crisis at first and then long-term shifts in the demographics of the Catholic church. The busloads of Italian pilgrims who were coming to pray and to bathe in the water reported to have healing properties were declining and were being replaced by one or two visitors from Africa or Latin America.

It was a crisis for the city with the second-most hotel rooms in France.

The figures rebounded a bit in 2018 thanks to the city’s aggressive tourism strategy designed to emphasize Lourdes as a regional hub and gateway to the Pyrénées. The town also wants to highlight that it is not just for Catholics, but rather that it offers a broader spiritual experience. It is a place with a population of less than 15,000 that welcomes millions of visitors every year, many of them terminally ill. That experience of seeing so many people helping others is a chance to see the very best of humanity, town leaders say.

For a city looking for another boost, the timing of the musical version of Bernadette is most welcome.

“You don’t have to be a pilgrim to be attracted by music,” Corine Laussu, head of promotion and communication for the Lourdes tourism board, told me. “It’s a new way to promote Lourdes and the story.”

Ciurleo’s belief that Bernadette’s story also transcends its roots in Catholicism is in perfect sync with that spiritual tourism message. Indeed, whether or not one is religious or Catholic, the broad outline of Bernadette Soubirous’ story is a remarkable one.

Between February and July 1858, a girl who could not write and spoke a mix of French and regional languages, saw what she described 18 apparitions that started as just light and wind, but eventually took the form of a woman who called herself the “immaculate conception.” She told Bernadette that the girl would find a healing spring under the dirt, and that a chapel should be built on the place.

Somehow through her force of will, she convinced not just her family and the village, but the Vatican which led in the coming years to the construction of a stunning Gothic Cathedral surround by sprawling sanctuary grounds that are among the most important Catholic pilgrimage sites in the world. 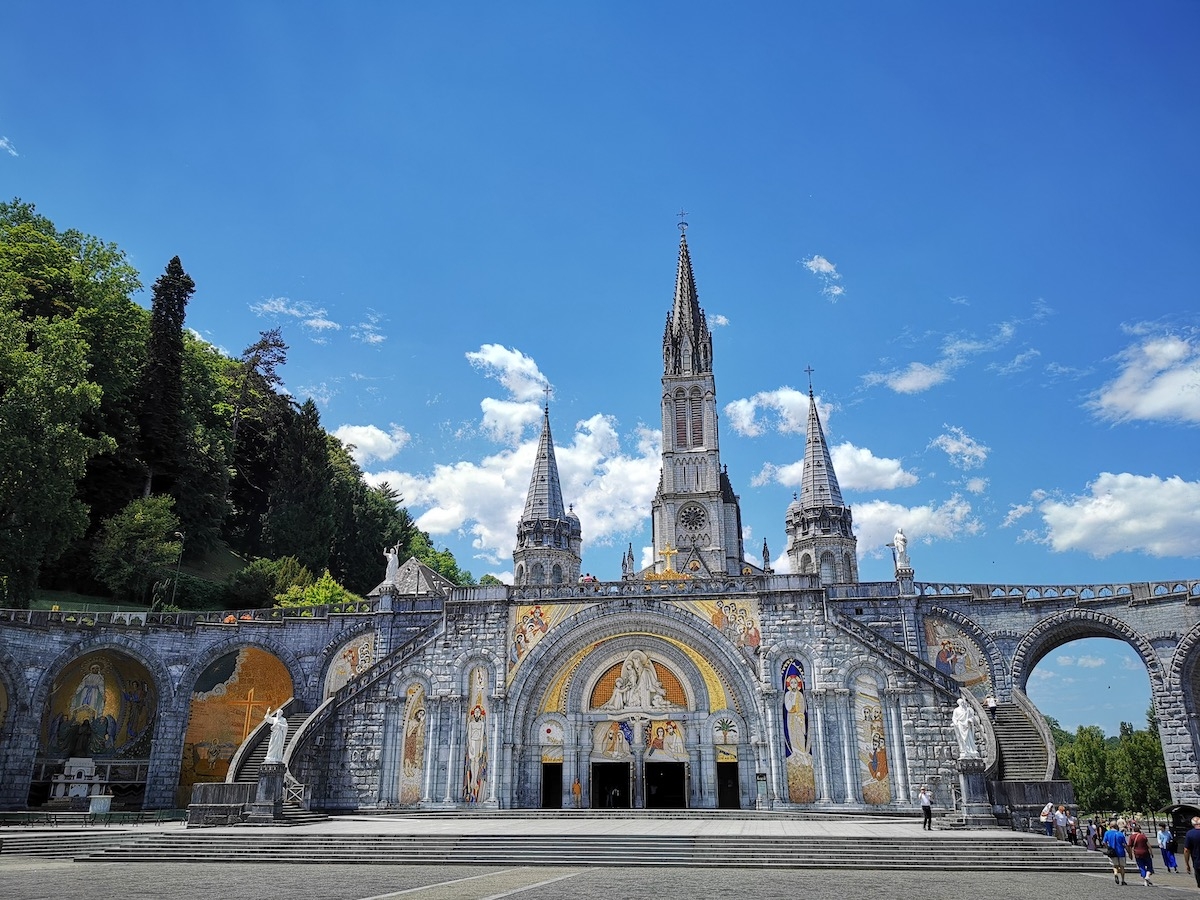 In the post “Hunger Games” world, teenage heroines have been having a major cultural moment. And indeed, it was the courage of a teenage girl that is precisely what struck Ciurleo, the show’s producer, when he first visited Lourdes nine years ago.

After a long career in radio, his own destiny took an unlikely swerve after he produced a successful Paris-based music about the Three Musketeers.  Ciurleo had fallen in love with musicals while traveling to places like London and New York, even admitting that he’s a fan of “Les Mis”.

While rehearsing a musical based on Robin Hood at a theater in southwest France about nine years ago, Ciurleo gave the cast a day off and took some of them to Lourdes.

Raised Catholic, Ciurleo’s grandmother used to talk about Lourdes and Bernadette and made several pilgrimages herself. After visiting the grotto, he told the story of Bernadette to the Robin Hood cast. Though they were a mix of religions and backgrounds, they seemed thoroughly mesmerized by the tale. And so a seed was planted that would take almost a decade to germinate.

“What really touched me was not so much my emotion, but to see them all so moved,” he said. “They were from many religions, but they were all very affected. And when I told them the story of Bernadette, it’s a story of a poor girl who barely spoke French, and who did not go to school because she was often sick, and who one day is out collecting wood and sees this apparition. She lived some very difficult moments and suffered through some very hard interrogations.” 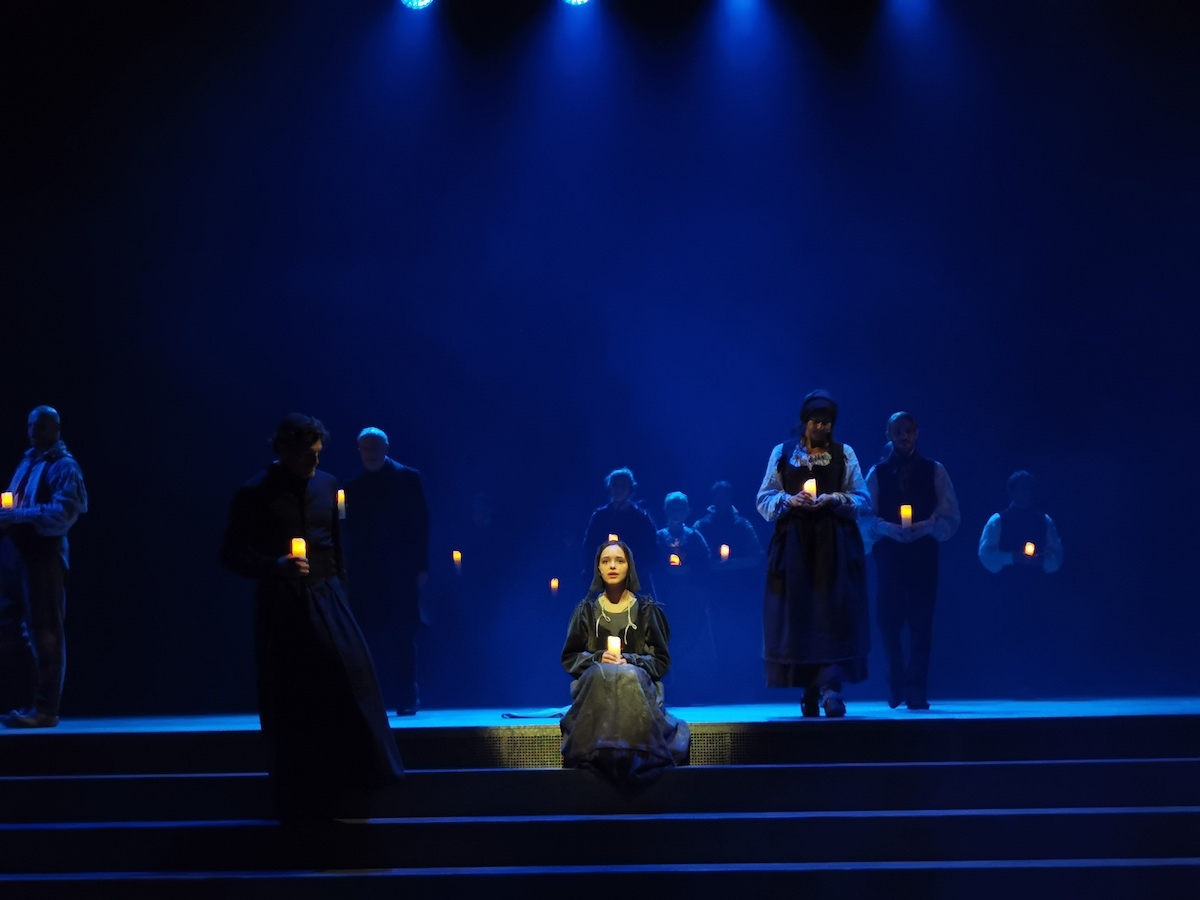 Ciurleo began gathering a team of French and Canadian’s to write the story and music, including the musical director for Celine Dion’s shows. The delved into original source material about Bernadette, who became a media sensation during her own time as word of her visions spread.

They slowly developed the book and the music, consulting with a priest. And they raised the €10 million budget to finance the show from a range of private investors who include one of France’s most famous comedians, Gad Elmaleh, who is Jewish and was born in Morocco.

City leaders were initially skeptical, worried that the story would be either too  Catholic or else distort and sensationalize the story beyond recognition. But the Bernadette team received an unofficial thumbs up from church leaders for their fidelity to the source material. And eventually the city agreed to help renovate a local theater not just to accommodate the technical needs of the stage and set, but also to improve the acoustics and expand access for people coming in wheelchairs or hospital beds. And video screens which will show subtitles in three languages.

For now, the musical is booked for 200 nights over two years in Lourdes during the summer and fall high seasons for pilgrims. 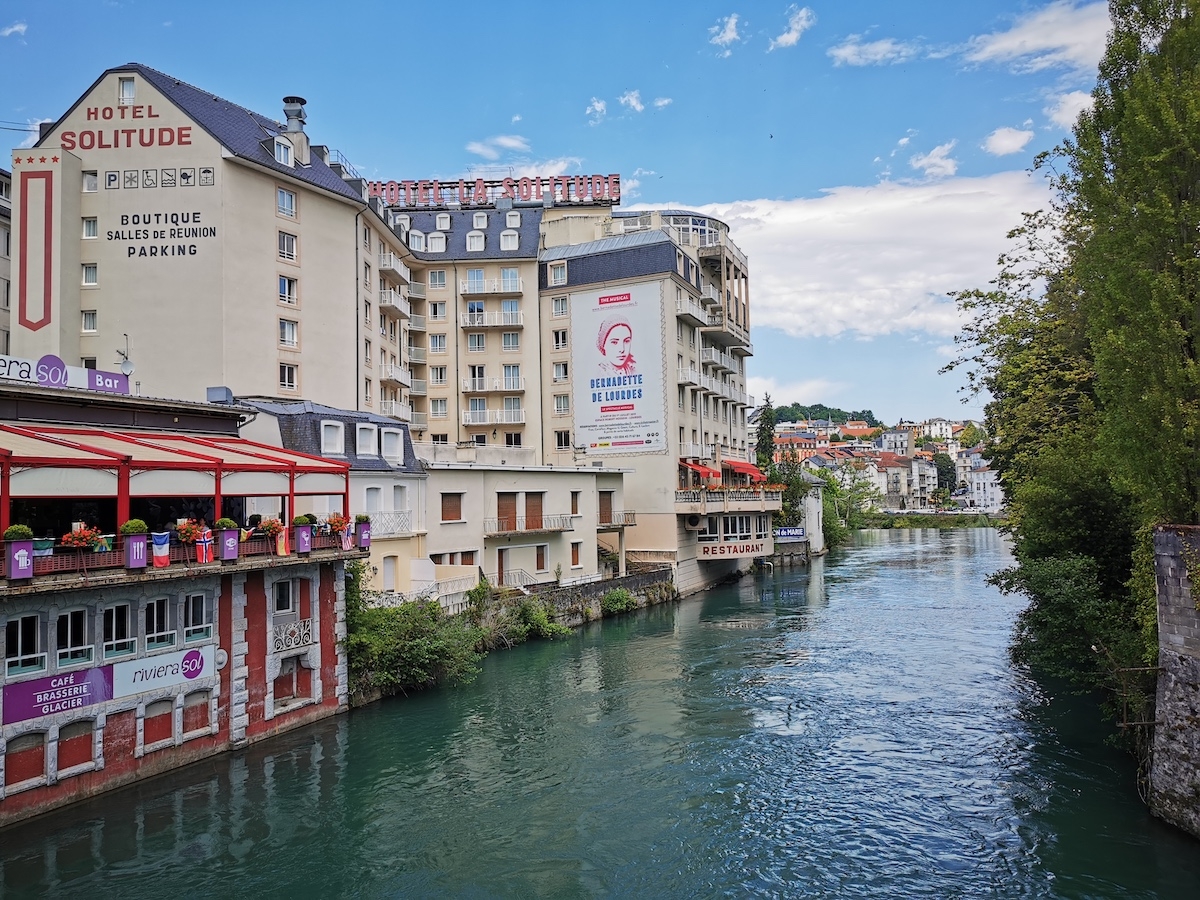 Meanwhile, Ciurleo has been hustling the business end while doing nonstop promotion.

Tickets are being sold at reasonable (compared to Broadway at least) prices, with further discounts to people who are ill or handicapped. He’s working with pilgrimage tour operators to create packages that include the show. But those ticket prices means the Lourdes production won’t turn a profit.

To earn back investors’ money, he’s counting on foreign productions. So far, he’s signed deals for productions in several other countries already, including Italy, Brasil, and Canada, which ensures that the songs and story about Lourdes will echo far and wide.

Ciurleo even said he’s working on finding a partner to produce the show in the most sacred of all grounds for musicals: Broadway.

He could have taken an easier road and staged the show in Paris. But he has remained determined throughout that it had be done in Lourdes. Beyond creating a spectacle, Ciurleo very much wants it to be a magnet that draws visitors, particulary French ones, to see Lourdes.

“There are people coming to Lourdes for this show who will come for the first time,” he said. “There are people from Tarbes,  which is the city right next to Lourde, who have never set foot in Lourdes, and who will come the first time to see the show. That’s why it’s important for the city and for the sanctuary, too, that we will bring other people to Lourdes. Our goal is that people discover what really happens each day at Lourdes and the sanctuary.”