Postcards from Lille: The perfect daytrip to northeast France 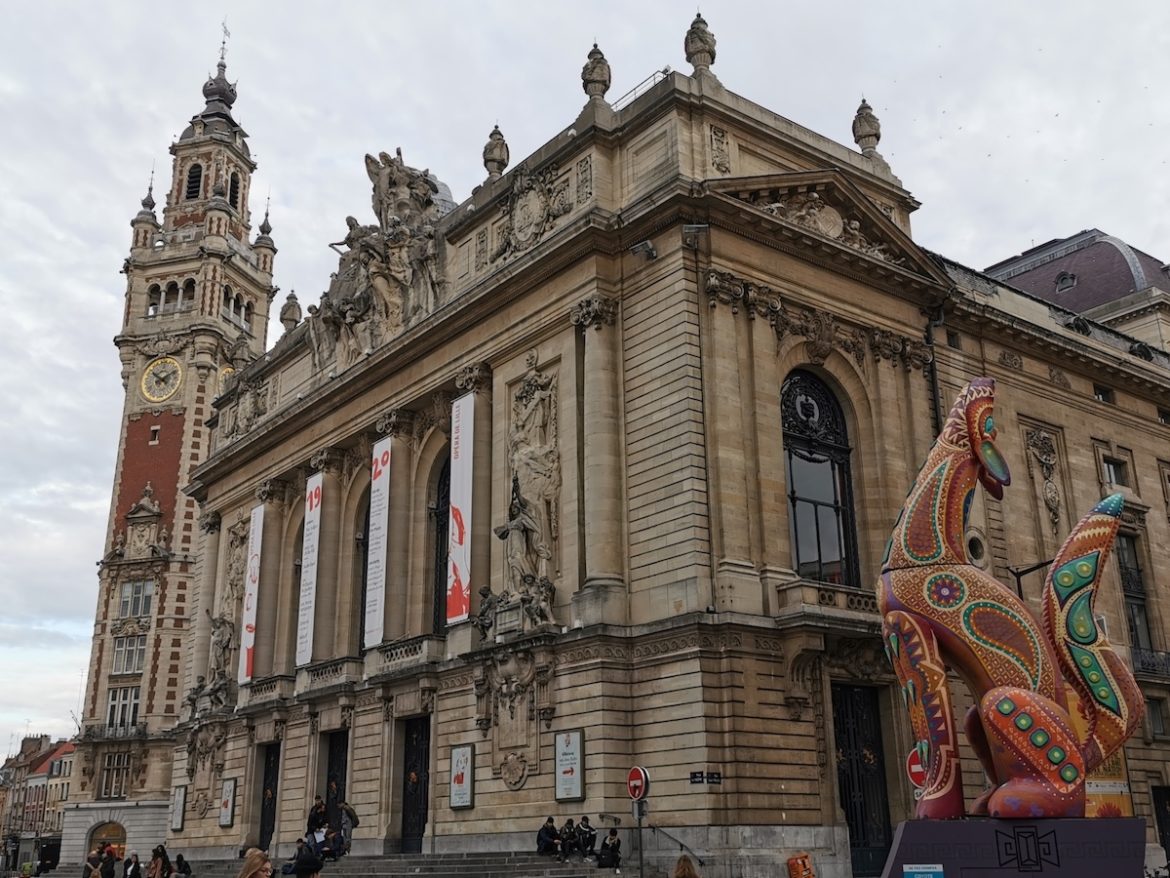 What I knew about Lille before last month was pretty much zero. Tucked into a far corner of France, close to the Belgium border, the city seemed about as far as one could get from our lives in southwest France.

Having a few days to play while staying Paris, I decided to make a detour to Lille with my daughter. While I prefer the south, one thing that I do envy about Paris is the ease with which you can get pretty much anywhere in France by train. A trip to Lille is just one hour by TGV, which makes a day trip from the capital city a perfectly reasonable adventure.

Blissfully uninformed, we stepped off the train and were immediately greeted by a 8-foot, yellow bust of a woman who seemed to resemble my daughter just a touch. I looked around for information about her (and searched online later) but didn’t find anything that explained the seeming randomness.

I’m guessing, however, that this young woman was somehow related to what he saw next: A menagerie of bizarre creatures lining Rue Faidherbe. We had decided to make our way to the tourist office, and on the way encountered these colorful, vibrant monsters that turned out to be part of the citywide Eldorado Lille3000 festival. This Mexican-theme event had been running for several weeks by this point, so we were lucky to catch these wonders before they disappeared.

Because we had come in cold, I didn’t know the story that somehow linked Lille to Mexico. But at first appearances, it made me appreciate that the city must at least have some sense of whimsy.

Once we had cleared the statues, we found ourselves in Vieux Lille, standing in the Place du Theatre. From the tourist’s vantage, this is the gold at the end of the rainbow. But for now, we just paused to look at the Lille Opera House (in the photo at the top of the story) before continuing our trek to the tourist office.

At the tourist office we made a couple of big decisions, with help from the friendly staff. First, we bought tickets to a guided tour of Vieux Lille in the afternoon. And second, at the insistence of my daughter, we would make this a mostly non-digital day (not counting photos). She picked up a tourist map and wanted to guide us just using that signposts.

The first thing that caught our eyes was the Citadel, a 17th-century fortress about a 20-minute walk northwest from the city center. The Citadel boasts a zoo and a little amusement park for the youngsters. But perhaps the most intriguing thing for me was the first glimpse it provided of Lille’s history.

The Citadel was built at the insistence of French military engineer Sébastien Le Prestre de Vauban who worked for King Louix XIV. It turns out, in one of those mysteries of European history and geography and tangled bloodlines, that Lille was part of a Flanders territory owned by Spain.

When the Spanish king died in 1665, King Louis, being married to a Spanish woman, claimed the rights to the territory. After a brief military skirmish, Lille became part of France. And Vauban felt a fortress was necessary to defend against the Spanish, the English, the Dutch, just about everyone who might want it.

No doubt the Citadel was an impressive structure of its time. But to be honest, walking the grounds was somewhat less compelling. Think of it more as a big city park with lovely foliage and streams and canals. But what little there is to see beyond the remaining walls is a functioning military site and so closed to the public most days.

This would be a lovely thing to have at your doorstep if you lived here, a nice place to walk or jog, or even bike a bit. But while it was a pleasant morning walk, we were ready to move on.

From there, we decided to trace an arc around the outside of the old city, running southeast and then turning back to the city center for lunch. This was again a nice enough walk, but if I were to do it again, I would rent a bike. The highlights are spread out over several blocks which are mostly filled with routine shops, tabacs and modern structures that are serviceable but hardly inspiring.

Still, those historic highlights that we eventually crossed made the stroll well worth the time:

If there is another pitfall to taking an unplanned analog trip, it is not knowing things like when the Lille Belfry would close. Alas, we missed the last elevator to the top before lunch by just minutes. And with tickets to the city center tour later, we’d have to skip it on this visit.

The tour after lunch gave us a great look at Vieux Lille, starting with the exterior of the tourist office itself which one upon a time was part of a much grander palace known as Palais Rihour and dating from the 15th century.

From there we moved into the Place du Général de Gaulle. There we heard the story of the rather grumpy looking Colonne de la Déesse who stands in the center and was commissioned to honor the fighting against Austria during the French Revolution.

To one side is the headquarters of local newspaper La Voix du Nord . It has some Flemish touches on its façade and three golden women on top, known as the “Trois Grâces” who each symbolize one of the former regions to which Lille belonged. Today, they keep silent watch over the shopping mall below.

On another side, La Vieille Bourse hints again at Lille’s unusual history. This marketplace was built under Spanish rule starting in 1652 and has a spectacular exterior representative of the Flemish sensibility of the time: ornate figures and lively colors. Those façades extend all the way around the building, while inside there is open courtyard that still hosts various markets during the week.

By now, we were an hour into the tour, and our energy was flagging a bit. One can only absorb so many anecdotes. Mostly we just enjoyed wandering the streets and gazing at the Flemish-style architecture, and that feeling that we were at once in France and yet not in France. In a country that emphasizes integration and a rigid adherence to a singular French culture, Lille has managed to remain distinctive.

The final stop on the tour was Lille’s Notre Dame de la Treille, a kind of gorgeous disaster.

Started in the 19th century to create something that looked like it was from the 13th century, it suffered an ill-conceived architectural competition, 2 wars, and a lack of funding. As a result, much of the originally planned work was never finished.

Despite the shortcomings, it’s an imposing building with a magnificent interior. And with ongoing work on its main façade (see the photo below), perhaps it may yet one day achieve its full glory.

As this was late October and we were in the far north, the light was dimming by the time the tour ended. While we waited for our train back to Paris, we ducked into Cafés Méo on Place Charles de Galle to sample some of Lille’s famous merveilleux.

In this case, the shop was selling the versions produced by Lile’s renowned patisserie Aux Merveilleux de Fred. These little pastries are made from meringue with a coating of whipped cream around them. We sampled one with a chocolate whipped cream exterior that was covered with dark chocolate shavings and another nicknamed sans-culotte (meaning without, ahem, women’s underwear) that had caramel whipped cream.

Neither of us is typically big on meringue, but these were indeed amazingly rich and decadent, remarkably creamy as one would expect but without being overwhelmingly sweet. A handful of miniature ones left us satisfied and marked the perfect bookend to the day.

Some would say the merveilleux are Lille’s most important cultural heritage. Despite all the wonders we had seen and stories we’d heard that day, I wouldn’t argue.

Saint-Eustache cathedral is a ‘Gothic skeleton dressed in Roman rags’

[…] chief architect and was in charge of building military installations like this one across France (We’ve visited a similar one in Lille.). He was widely considered a master engineer and was also responsible for overseeing the […]