On the backroads in Gers from Condom to Bézéril 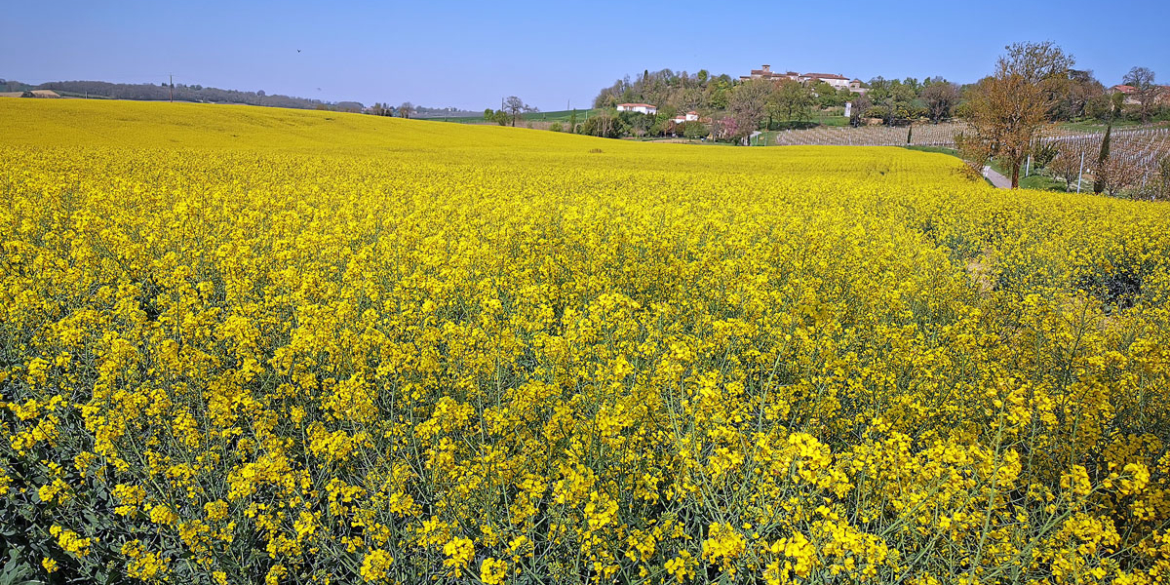 A field of Colza flowers in Gers.

One doesn’t need much of an excuse to visit the Gers Department, the vast region that lies to the west of our doorstep in Toulouse. But attending a meeting in Condom last week gave me one anyway. And on the leisurely drive back I stumbled across plenty of reminders of why this corner of France remains so alluring.

Sitting in the heart of the Gascony region, Gers is one of the most rural streteches in all of Europe. Less than 200,000 people live in a region stretching across 2,416 square miles. And it remains far less trampled by hordes of tourists than, say, its cousin Provence to the east. But that’s not due to a lack of history, architecture, or stunning landscapes.

After the meeting, I took a brief walk around Condom. With a population under 10,000, the city center was calm on a Friday afternoon. The Petite Baïse River bisects the town.

The streets hold lots of little surprises, like this small mural.

In the heart of the city is a statue of The Three Musketeers and d’Artagnan which is next to the Cathédrale Saint-Pierre de Condom. The statue was created in 2010 by Zurab Tsereteli, and has become an obligatory stop for selfie takers.

But for me, the Cathédrale remains impressive all on its own. There was some kind of chruch on this spot as earlier as the 7th century. The various structures evolved, were destroyed, and rebuilt over the centuries. The current Cathédrale dates from the 17th century, though it was also attacked, suffering heavily damage, before being restored in the 19th century.

From Condom, I drove southeast on D654. You don’t need to travel far outside Condom to be plunged back into the rolling hills and sweeping landscapes that dominate Gers. While Gers may not lay claim to being France’s largest producer of Colza, the flowers are certainly plentiful here.

And early April turned out to be great timing to catch them in bloom.

But the whole route, as it wound around hills and little towns, revealed great views of the countryside.

Eventually, I arrived in the town of Fleurance, which I had never heard of until I saw the sign for it and found myself navigating through the city center. That’s one of the things we love about France. Places that don’t necessarily rank high on tourist hype lists can still turn out to be wonderful discoveries.

After leaving Fleurance behind, I drove south toward Auch, and then east toward Toulouse. On the way toward Condom in the morning, I had spotted a château on the hillside just outside of Auch. Curious, I decided to make a slight detour and see it up close.

It turns out to be a privately-owned property called Château de Montégut, situated in the small village of the same name. Aside from big signs saying “no entry,” there wasn’t much information posted about. A little search after I returned home turned up a village website that says it was probably built in the 13th centure and was bought in 1806 by J.P Barada de Auch, and still owned by his descendents.

Finally, I followed a winding route southeast to the village of Bézéril. In this corner of Gers, the roads turned single-lane for both directions. So driving was slow, and cautious. With an occassional need to pull off and let someone pass.

Just as the road opened up again at Bézéril and I was about to zip through, I noticed the Eglise Saint-Jacques. It was built in 1757, and to my eyes, seemed to hint at the Mission-style churches the Spanish built in California.

The church sat just in front of a private château.

As unplanned road trips go, this was wonderful way to pass a couple of hours. The backroads in France are full of such hidden gems. And Gers certainly has more than its share of this cultural treasure.